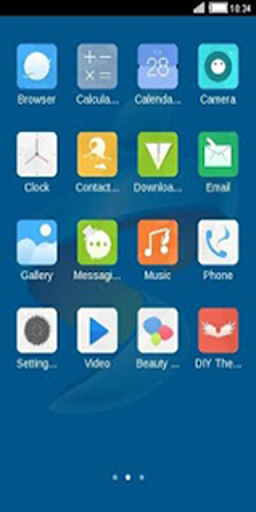 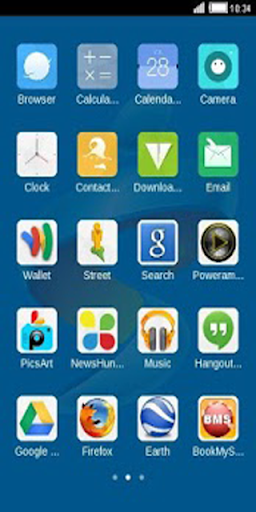 And for those who haven’t tried Mobo mobile market yet:
it’s time to smarten up your Android phone playfully! Mobogenie mobile market is an awesome platform for Android resources, where you can find the best mobile applications, games, music, videos, themes,wallpapers, as well as various other types of resources. Now it has been promoted in 23 different languages, and owns more than 2 billion users around the world.

Features
Awesome HD wallpapers with well-designed icons.
DIY a theme with your own photo right on the phone.
Tons of awesome android themes in the library.
Transparent folder and app drawer interface.
Notice:
This theme is customized for C Launcher. Tap or click here to install C Launcher (If you haven’t yet).

Thanks for choosing C Launcher theme. If you found this android theme useful, rate five stars and share it with your friends. Your support will definitely inspire us to design more!

Q&A:
How to apply?
After successful installation, open home screen, then tap Theme button.
Downloaded themes can be found on Local.
Or you can choose one from tons of free android themes Online.
DIY a theme?
No problem! In C Launcher community, you are the designer! C Launcher theme is more than a theme, it’s a themer. Every single day, tens of thousands of new themes are created by C Launcher users! Join more than 30 million C Launcher users worldwide and show your creativity and ingenuity right on your phone!
Hide an app?
That’s easy! C Launcher can do that for you. Scratch outwards with two fingers on home screen and the Hide Apps menu will pop out. All your private apps are perfectly safe here! Also you can put here the unnecessary apps, which will be placed on the bottom automatically.
Looking for a theme to show your style ?
That’s exactly what we provide! All kinds of themes for all kinds of folk! Love theme, sports theme, cartoon theme, abstract theme, pink theme, blue theme, red theme, cute theme…a world of themes are waiting for you to choose! Designers and theme lovers across the world are coming up with new themes everyday!
Get more free C Launcher themes?
Join C Launcher community and create your own theme: http://c-launcher.com/ or you can search “C Launcher themes” on Google Play. Free themes can never be too much!
Why C Launcher themes?
Fair enough! Go Launcher, APUS launcher, ZERO launcher, Solo laucher,… a world of launchers are out there waiting to beautify your home screen. What makes C Launcher themes special is that it never compell certain types of beauty on you, instead it listens to you, letting you to define beauty on your phone.
Cultural problem?
Well, C Launcher team has thought about ethier. C Launcher themes has been localized and culturalize for more than 30 languages, including Chinese, Arabic, Hindi, Frech, Italy, Spanish …
Worry about the compatbility with your phone?
Don’t! C Launcher themes have already thought about that for you. They have been tested extensively and are compatible with 99% of the major Android devices. They are perfect for Samsung Galaxy series, Galaxy Note series, Google Nexus series, HTC, LG,and more!
And more new features are coming soon! C Launcher team is working really hard on live wallpapers and 3D themes, and they are just around the corner!

Carl Hazzard
Helpful app
It gives u wat u need

LiterateLovelyGirl33
Thanks
Thank you for making this app lol

Manju Parkavi
Pravesh
I loved this so much

Marykhate Sevilla
Whats the use of this app?
I thought somebody says it gives you what you need, then where? Its just a wallpaper.

Michelle Battogtokh
Its stupid
It forces to rate and download cluancher and yet ot still will not work wtf does mobogenie think it is? hudlaa shaadag app bain shuu humuusee

Shuaau Mohamed
Cool
I love it!

DS get
*You must own a Synology NAS to run this app, and be running the latest Download
Synology Inc.