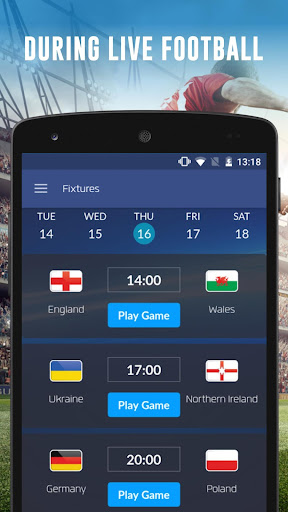 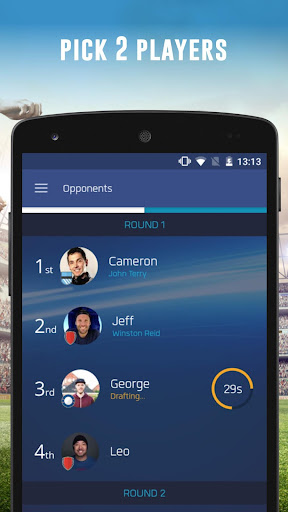 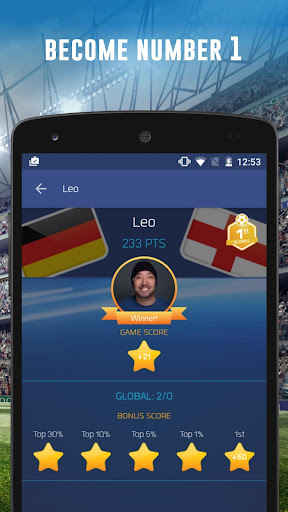 The must have Real-Time Fantasy Football app for the 2017/2018 Premier League season. Experience the new way of following live football, enjoyed by over 1,000,000 football fans last season.

Join the action today and start playing against friends and fellow Fantasy Football fans from across the world.

★ NEW! Data Scout gives incredible insight into the form of teams and players ?
★ Exciting draft system to pick your players for every match ?
★ Points update LIVE during matches based on real-life actions on the pitch ⚽
★ Use power-ups to boost your players or trade them out ⚡
★ WEEKLY CONTESTS shows who the best fantasy football player in the world is ?

PRE-DRAFT OR DRAFT YOUR PLAYERS: ? ?

WHO WILL YOU DRAFT? ?

Follow your timeline to keep updated on all the points your players are earning. Your score goes up for every action your player completes in real-life - passes, tackles, interceptions and much more!

COMPETE DURING EVERY LIVE MATCH: ⚽️

Enter the game and draft pick 2 players before the game starts and then earn points LIVE based on their real-life performance on the pitch. A completely new way of playing fantasy football!

BOOST OR TRADE YOUR PLAYERS IN-GAME: ?

Devise your own strategy to use your POWER-UP cards! Use Double Points or Sharp Shooter if you think your player is about to make a big impact, then celebrate when they score! Want to try to stop an opponent from pulling ahead? Freeze their player!

CHALLENGE YOURSELF AGAINST THE WORLD: ?

Every match has a live global leaderboard with Fantasy Football fans from all around the world. Try and finish first for a special badge on your profile and maximum respect!

CLIMB UP THE LEADERBOARD: ⬆️

Find out if you truly are the best Fantasy Football player! As soon as you join, you will be ranked on a leaderboard for your club, country and globally. Work your way up the leaderboards each month, and fill yourself with pride when you find out you're the number one UFL player in your country!

All game scoring is based on live data licensed from Opta, official data partner of the English Premier League.
Read More

OG ELMER
Great app to use with friends

Keelan Grant
Fix player glitches
I try to pick players (that are available of course) but the timer just runs down and gives me a random player. It's been happening in 75% of the games I play. I even had first pick and it still wouldn't let me choose who I wanted. The game is great, it just seems to mess up when choosing players..

aleeyu arfa
Ultimate fanlive is the best football game app I have ever seen!

Sebastian Peltonen
Best football app there is!!!
Just pure awesomeness!!!! Just one thing would make it perfect would like an action zone were the ball is or like text commentary or something like that :)

Jamal Gonzalez
Work fine
Now it's working fine most of the time. But I wish you make the free coins 50 instead of 20 because it's every 2 hours. Or make it 25 every hour ?. And you need to put an option to change password or email

Thomas McClelland
Amazing but...
Where can you obtain Promo codes? It's very difficult to obtain coins...

Bryson Lyles
The game is amazing but...
I hate that the games cost coins and it would be ok to cost coins if it wasn't so difficult to get them. One recommendation is that when someone invites you to a premium game you shouldn't have to pay

George Silgram
Doesn't work
App don't work. Tried creating a league with my friend but when I searched his name it didn't come up

Kenzo Senior
Great game
My football friends play this and adds something extra to the game without paying. You just need to sort the lag out as it is a major issue

Real Cricket™ 17
Real Cricket™ is here and here to stay! We have migrated to a brand new
Nautilus Mobile App Pte Ltd